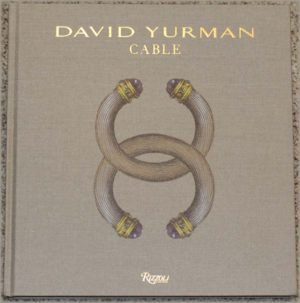 Most people don’t know that David Yurman started as a sculptor in the 1960’s. He created works from bronze. Yurman met his wife Sybil in 1969. She was a painter at this time. 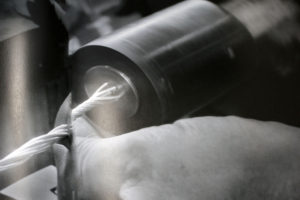 They worked together closely, feeding off each other’s creativity. People always said, “What we’re doing is one long art project.” With the use of colors from gemstones, David Yurman the sculptor and Sybil, the painter was united in a perfect expression of people.

Both started off as artists. He made a necklace for her out of bronze called the Dante that she wore to an art opening, and the gallery owner wanted to buy it, and that’s when it all started.

In 1980 Yurman made the Starlight Necklace, which won the World Gold Council award for innovative design in jewelry. He even sold one to Princess Diana!

This necklace was the precursor to his now signature cable design.

Yurman had prophesied about the cable design at the age of 12, one day on his walk to school, he ventured to a wooded area. There he found trees with hanging vines so enormous you could swing on them. I believe this was likely the beginning of the cable design that Yurman now incorporates into nearly every one of his collections. 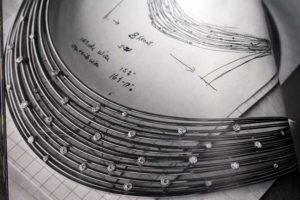 But David Yurman is undoubtedly not the first to utilize cable in jewelry. Cable design goes way back in history. “The oldest image we have of a human is a robust, rounded female figure 35,000 years young with a cable belt draped over her belly.”

“The ancient Sumerians, Assyrians, and Egyptians were probably the first to develop versions of cable in a sophisticated way, between five and three thousand years ago.”

The arts and crafts movement of the time was all about handmade jewelry, but Yurman embraced the machine “we had to learn techniques whereby we could produce the work in multiples without compromising ourselves” Because of this, they were able to make their cable bracelets in numbers.

The quotes from the text explain the use of cable for David Yurman: 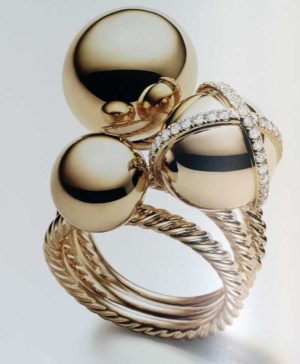 David Yurman created jewelry for a new clientele, women who would purchase jewelry for themselves. Before Yurman came along, jewelry was mostly purchased only as gifts for special occasions.

Initially, in the late 70’s and early 80’s, David Yurman required retailers to sell his pieces in collections only! You weren’t allowed to buy just a ring or bracelet.

Since then, he has eliminated this rule, because today, people apparently wouldn’t agree to buy an entire collection.

This quote from Sybil Yurman explains the Yurmans’ company philosophy:

“It isn’t about one piece of jewelry. It’s about a lifestyle, and an ease, a casualness playfulness, zaniness, and beauty.” Sybil Yurman (186).

I enjoyed all the incredible images in this book and learning the story of how David Yurman came to be one of the top jewelry designers today. See more David Yurman Jewelry.

I love David Yurman jewelry, and am always looking to buy Yurman pieces, feel free to reach out to me for a free estimated, by texting or calling Mike at (773)490-9828